What is the vagus nerve?

There are 12 cranial nerves in the body. They come in pairs and help to link the brain with other areas of the body, such as the head, neck, and torso. Some send sensory information, including details about smells, sights, tastes, and sounds, to the brain. These nerves are known as having sensory functions. Other cranial nerves control the movement of various muscles and the function of certain glands. These are known as motor functions. While some cranial nerves have either sensory or motor functions, others have both. The vagus nerve is such a nerve. The cranial nerves are classified using Roman numerals based off of their location.

The word “vagus” means wandering in Latin. This is a very appropriate name, as the vagus nerve is the longest cranial nerve. It runs all the way from the brain stem to part of the colon. The sensory functions of the vagus nerve are divided into two components:

Sensory functions of the vagus nerve include:

Motor functions of the vagus nerve include:

why is Vagus nerve stimulation done? 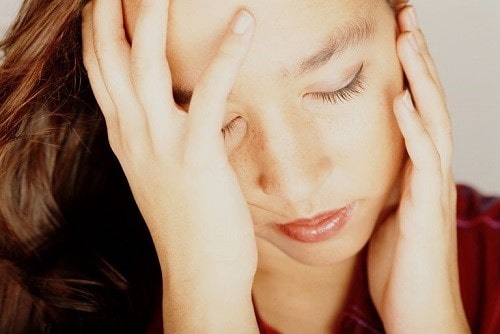 The FDA has also approved vagus nerve stimulation for the treatment of depression in adults who:

It's important to carefully consider the pros and cons of implanted vagus nerve stimulation before deciding to have the procedure. Make sure you know what all of your other treatment choices are and that you and your doctor both feel that implanted vagus nerve stimulation is the best option for you. Ask your doctor exactly what you should expect during surgery and after the pulse generator is in place.

You may need to stop taking certain medications ahead of time, and your doctor may ask you not to eat the night before the procedure.

Before surgery, your doctor will do a physical examination. You may need blood tests or other tests to make sure you don't have any health concerns that might be a problem. Your doctor may have you start taking antibiotics before surgery to prevent infection. 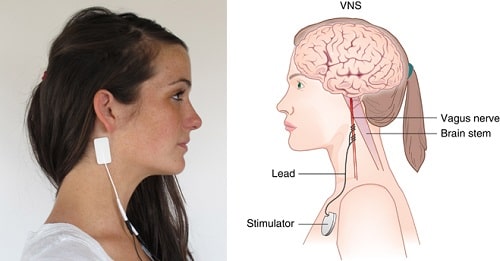 Surgery to implant the vagus nerve stimulation device can be done on an outpatient basis, though some surgeons recommend staying overnight. The surgery usually takes an hour to an hour and a half. You may remain awake but have medication to numb the surgery area (local anesthesia), or you may be unconscious during the surgery (general anesthesia). The surgery itself doesn't involve your brain. Two incisions are made, one on your chest or in the armpit (axillary) region, and the other on the left side of the neck. The pulse generator is implanted in the upper left side of your chest. The device is meant to be a permanent implant, but it can be removed if necessary. The pulse generator is about the size of a stopwatch and runs on battery power. A lead wire is connected to the pulse generator. The lead wire is guided under your skin from your chest up to your neck, where it's attached to the left vagus nerve through the second incision. 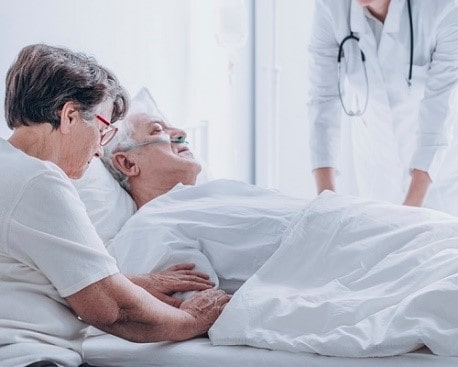 The pulse generator is turned on during a visit to your doctor's office a few weeks after surgery. Then it can be programmed to deliver electrical impulses to the vagus nerve at various durations, frequencies and currents. Vagus nerve stimulation usually starts at a low level and is gradually increased, depending on your symptoms and side effects. Stimulation is programmed to turn on and off in specific cycles — such as 30 seconds on, five minutes off. You may have some tingling sensations or slight pain in your neck and temporary hoarseness when the nerve stimulation is on. The stimulator doesn't detect seizure activity or depression symptoms. When it's turned on, the stimulator turns on and off at the intervals selected by your doctor. You can use a hand-held magnet to initiate stimulation at a different time, for example, if you sense an impending seizure. The magnet can also be used to temporarily turn off the vagus nerve stimulation, which may be necessary when you do certain activities such as public speaking, singing or exercising, or when you're eating if you have swallowing problems. You'll need to visit your doctor periodically to make sure that the pulse generator is working correctly and that it hasn't shifted out of position. Check with your doctor before having any medical tests, such as magnetic resonance imaging (MRI), which might interfere with your device.

For most people, vagus nerve stimulation is safe. But it does have some risks, both from the surgery to implant the device and from the brain stimulation.

Surgical complications with implanted vagus nerve stimulation are rare and are similar to the dangers of having other types of surgery. They include:

Side effects after surgery

Some of the side effects and health problems associated with implanted vagus nerve stimulation can include:

For most people, side effects are tolerable. They may lessen over time, but some side effects may remain bothersome for as long as you use implanted vagus nerve stimulation. Adjusting the electrical impulses can help minimize these effects. If side effects are intolerable, the device can be shut off temporarily or permanently.

Are there patients who should not receive vagus nerve stimulation treatment?

What is the length of time that a person should wait before considering a vagus nerve stimulator?

There's no particular length of time but rather enough time to show that at least two different seizure medicines, taken consistently at appropriate doses and which are appropriate for a person's type of seizures, are not adequate to control seizures satisfactorily. This determination is best made between each individual patient and their doctor. Under these circumstances, VNS should be discussed along with other options, such as other seizure medicines, the possibility of epilepsy surgery, a special diet, investigational medicines or devices, or lifestyle modifications.

Is there any type of epilepsy that vagus nerve stimulation does not help? 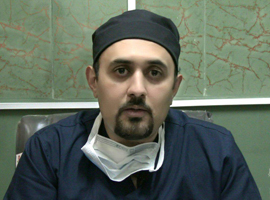